Children’s Programming Coordinator, Annmarie Holder shares why she picked La Luz Sunrise by Peter Hurd as one of her favorite pieces from The Grace Museum’s permanent Art Collection.

Born in Roswell, New Mexico, Peter Hurd originally attended military school before he realized he loved painting and wanted to pursue it professionally. After graduating from the New Mexico Military Institute in Roswell, he was halfway through West Point when he changed course to follow his true calling. He moved to Philadelphia, where he graduated from the Pennsylvania Academy of Fine Arts. Afterward, he became a private pupil of N. C. Wyeth, a noted illustrator and painter based in an area near the city.

Hurd worked alongside Wyeth’s own children, Andrew and Henriette, who were also studying under their father. Hurd worked as Wyeth’s assistant at his studio in Chadds Ford, Pennsylvania, for a number of years. In 1929, he married Henriette Wyeth. They would have three children, Peter, Carol, and Michael Hurd.

In the mid-1930s, during the Great Depression, the Hurds moved to San Patricio, New Mexico, settling on 40 acres. They gradually acquired more land, developing the 2200-acre Sentinel Ranch. The ranch and its surrounds provided endless material for their work. Their painting careers developed side by side. Henriette focused on floral studies, oil portraits, and still life paintings.

Hurd worked at capturing the landscape and the people who lived within it. His large egg tempera paintings of the local landscape earned him national recognition; reproductions were published in Life magazine. Later, during World War II, Life magazine sent Hurd all over the world as a combat correspondent with the US Air Force. He covered almost all the fronts of the far-flung battle line, creating hundreds of “War Sketches” that range from poignant to comic. 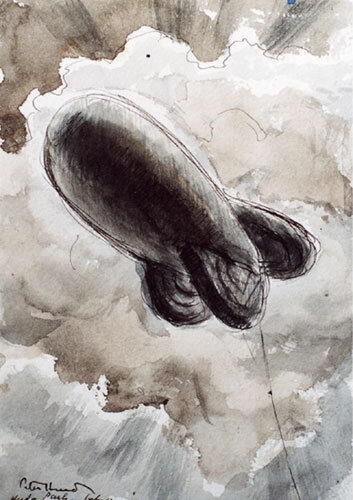 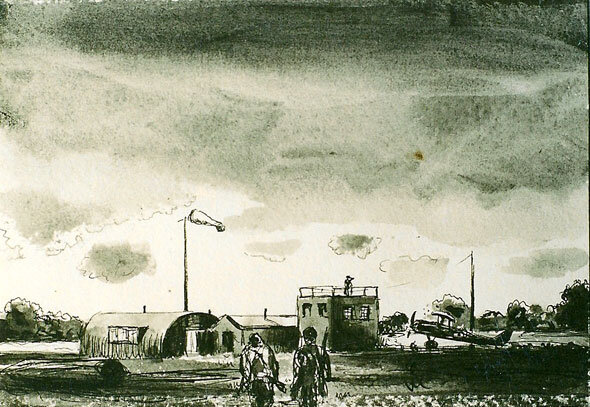 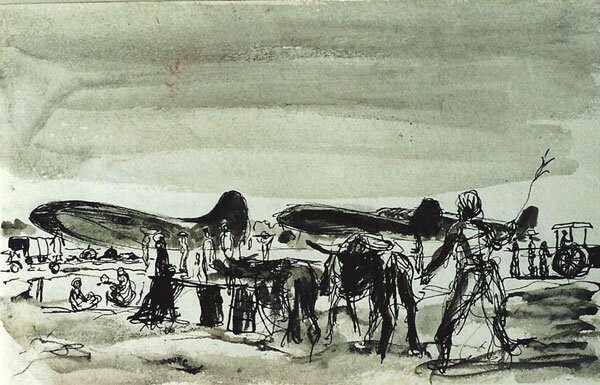 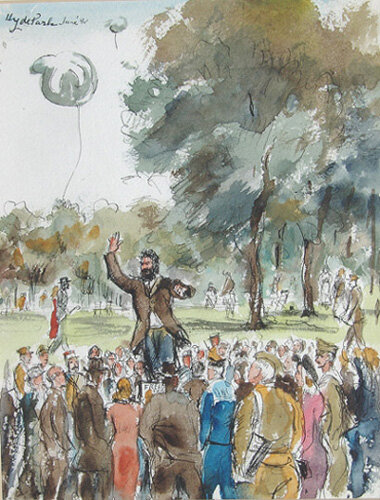 Hurd’s years with the Air Force had a profound effect on his artistic work. He had always been a careful and precise worker when he worked in tempera. But as an embedded war reporter documenting urgent or fleeting moments, he had to draw and work much more quickly. He began using watercolor, which he soon mastered. When he returned to painting the New Mexico landscapes, his work was characterized by a new freedom and looseness, but still displayed his customary subtle tones as a gifted colorist.

Some of Hurd’s most well-known portraits were of his neighbors, family, and friends at Sentinel Ranch. He loved to paint people who were deeply connected to the land, and always showed them outdoors, against the hills and sky. He wrote, “the ones I like best to paint are those whose lives are spent under the sky: Men whose clothing, skin and eyes are all conditioned by the wind.” His Portrait of Jose shows the foreman of Sentinel Ranch amid the ridges of the land he cared for. In what is perhaps Hurd’s hallmark work, Eve of St. John, Herrera’s daughter is bathed in the light of a candle she carries.

From 1953 to 1954, Hurd was commissioned for a major mural by Texas Technological College (now Texas Tech University) in Lubbock, Texas. He and his assistants painted the fresco mural in the rotunda of what was then the West Texas Museum (now Holden Hall). Hurd completed about one fresco per week over a two-year period, depicting pioneers and influential leaders of West Texas.

Hurd also was commissioned to paint the official portraits of two heads of state, United States President Lyndon B. Johnson and King Faisal of Saudi Arabia. LBJ famously rejected the 1967 Hurd portrait, for reasons unknown. This painting is now part of the collection of the National Portrait Gallery, of the Smithsonian Institution.

Many of Hurd’s works, along with those of his wife Henriette Wyeth, father-in-law N.C. Wyeth, and son Michael Hurd, can be seen at the Hurd-La Rinconada Gallery in San Patricio, New Mexico.