The Dia de los Muertos holiday is filled with beautiful symbols, traditions, and imagery. Every detail represents something significant and special in the remembrance of loved ones. Some traditions are rooted in ancient meso-American traditions, some came from Spanish/European cultural traditions, and some have evolved over the 3,000+ years of celebrations. From Monarch Butterflies to native Copalli incense to Cempasúchitl – learn about many of the imagery, symbols, and traditions…

Many people make altars or “ofrendas” (offerings) in their homes to honor their loved ones who have died. Every ofrenda also includes the four elements: water, wind, earth and fire. Water is left in a pitcher so the spirits can quench their thirst. Papel picado, or traditional paper banners, represent the wind. Earth is represented by food, especially bread. Candles are often left in the form of a cross to represent the cardinal directions, so the spirits can find their way. Every state in Mexico has its own particular way of setting up their ofrendas. In some regions, you can find a flat surface with all the elements on it, while in others you can find several levels. The most common ones have three levels, which represent heaven, earth, and the underworld. With more elaborate ofrendas, you can find up to seven levels. 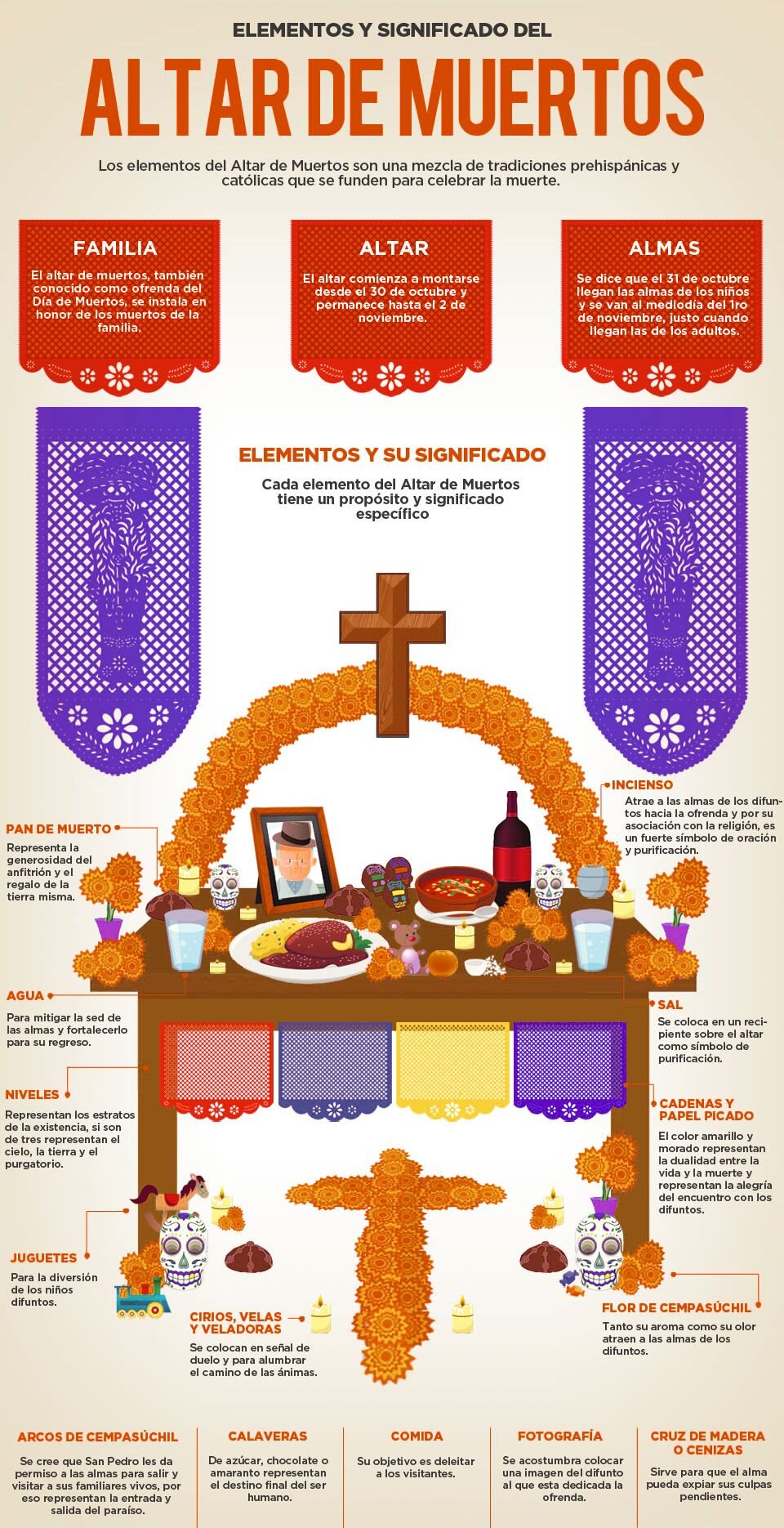 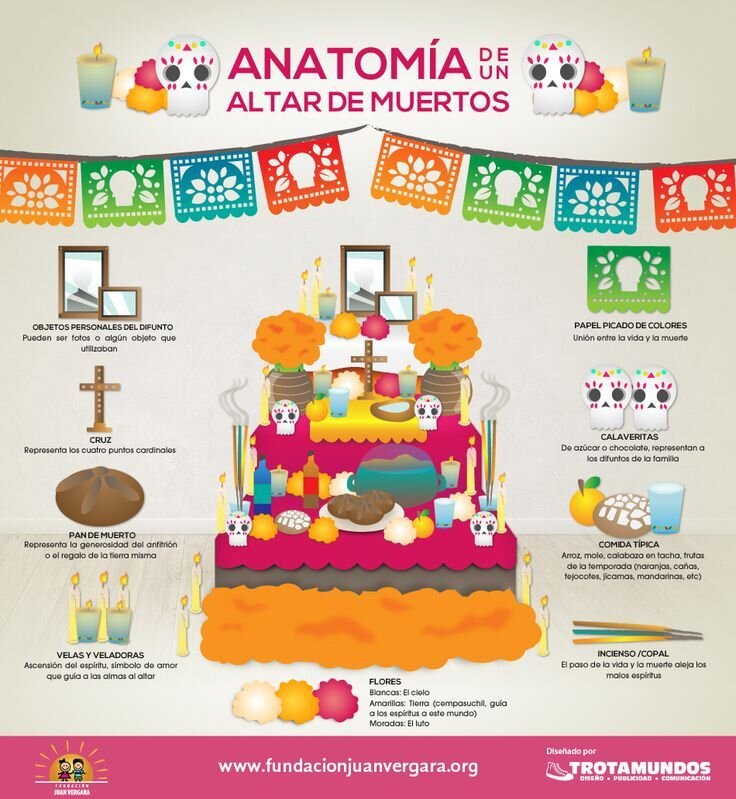 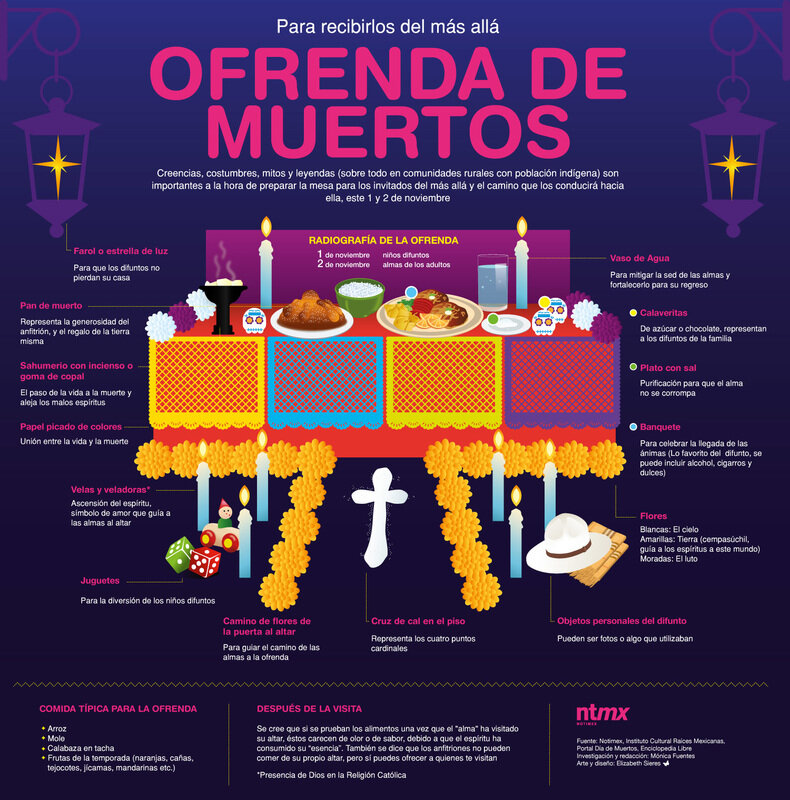 (Offering) It is used to refer to the things that are placed on the altar for the spirits. Sometimes the altar itself is referred to as an “ofrenda.”

A “calavera” is a skull, a “calaverita” is a little skull, and a “calavera de azúcar” is a sugar skull. These are placed on the altar and often have the name of the deceased person inscribed on the forehead. Sugar

(Bread of the Dead): It is one of most associated foods with Day of the Dead and can vary greatly from region to region. It is often placed on the altar but can also be consumed and dunked in coffee or hot chocolate.

(“Flor de Muerto”): Is a flower used in Day of the Dead altars and to decorate graves. It grows plentifully at this time of year in Mexico and its pungent odor is said to attract the spirits who come to visit their mortal loved ones on this day. This flower, used since ancient times for its medicinal properties, brings a unique color to the shrine that makes the spirits feel joyful and peaceful. You can find them in orange and purple, representing the earth and grief, respectively. They are also thought to guide the spirits thanks to their potent and fresh scent.

Copal incense was burned in Mesoamerica in ancient times and is still burned for special ceremonies and is often placed on or near Day of the Dead altars as another olfactory element to draw in the spirits. The word copal comes from the Náhuatl word “copalli” which means, “incense”. Copalli incense comes from the copal tree. It symbolizes the transformation from the physical, the tree, to the supernatural, the perfumed smoke. The rising smoke takes the prayers to the heavens and the gods. Pre-Hispanic civilizations such as that of the Aztecs and Mayans placed it in a clay incense burner as food for the Gods. In this ritual, the copal was offered to the four cardinal points and to the Sun to guarantee the protection of the people and gratitude for the crops.

They also used it in various energy cleansing ceremonies, such as temazcales, and to make protective or purifying remedies and incense.

It is placed in the offerings of the Day of the Dead as a purifier of the environment, which allows the spirits of our loved ones to enter the homes without risk.

The scent of copal is believed to be therapeutic. Indigenous communities use the different types of copal to cure headaches; diseases caused by cold or humidity; stomach, toothache, and uterine pain, burns, fever, and breathing problems.

Decoratively cut paper used in Mexico for all holidays and fiestas. During the “Día de los Muertos” celebration it is placed around the edges of the altar, which adds color to the table. Some say that the four elements are represented with different items at the altar and the movement of the “papel picado” represents air.

In some regions of Mexico sand sculptures or tapestries (“tapetes de arena”) are a vital part of the celebration. These are created with sand and pigment and sometimes other elements such as seeds, beans, flower petals and sawdust, and may depict religious themes, but more often depict death in a playful manner. The tradition of making tapetes originated in Spain as part of the Catholic feast of Corpus Christi, eventually leading up to Good Friday and Holy Week. The events mark the death and resurrection of Christ, and the tapetes for these celebrations depict scenes of the Passion.

“Angelitos” means little angels. On Halloween night, children who have passed away are believed to return and stay through November 1st.

This is a Mexican Spanish slang word for skeleton. “Calacas” figure prominently in Day of the Dead decorations. Sometimes the term “La Calaca” is used to signify death personified.

La Catrina: Is a female skeleton dressed in the style of upper-class women of the 1900s created by Mexican lithographer and illustrator José Guadalupe Posada. Originally used to depict contemporary figures as skeletons in a humorous way as a form of social commentary, the illustration has become a prominent figure in Day of the Dead decorations and celebrations.

A carnival-like celebration in which people dress up in costumes and dance. Comparsas play an important part in Oaxaca’s Day of the Dead celebrations, where costumes are incredibly creative and surprising.

Monarch butterflies play a role in Día de los Muertos because they are believed to hold the spirits of the departed. This belief stems from the fact that the first monarchs arrive in Mexico for the winter each fall on Nov. 1, which coincides with Día de los Muertos. 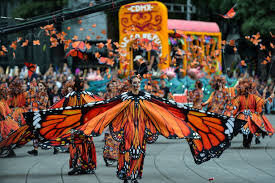 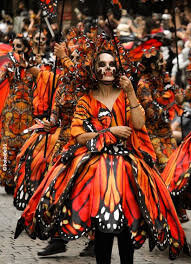 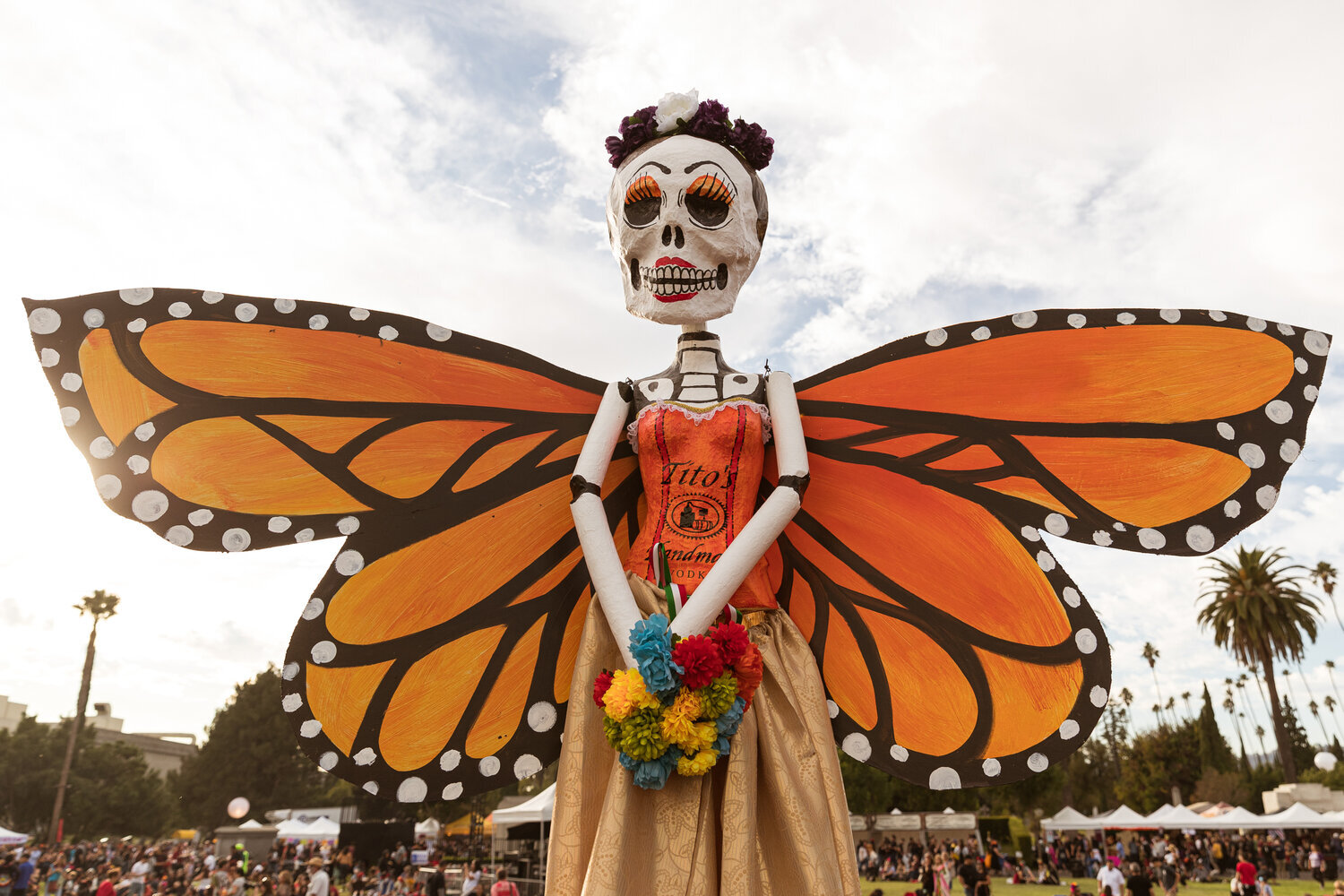 It was believed that the Xoloitzcuintli (an endemic and ancient dog breed) would help the spirits cross the Chiconauhuapan river to reach the Underworld. In those times, it was customary to bury a Xolo with the deceased, so that its spirit would guide them. Today, placing a ceramic Xolo or anything alluding to it is more than sufficient, so don’t worry. 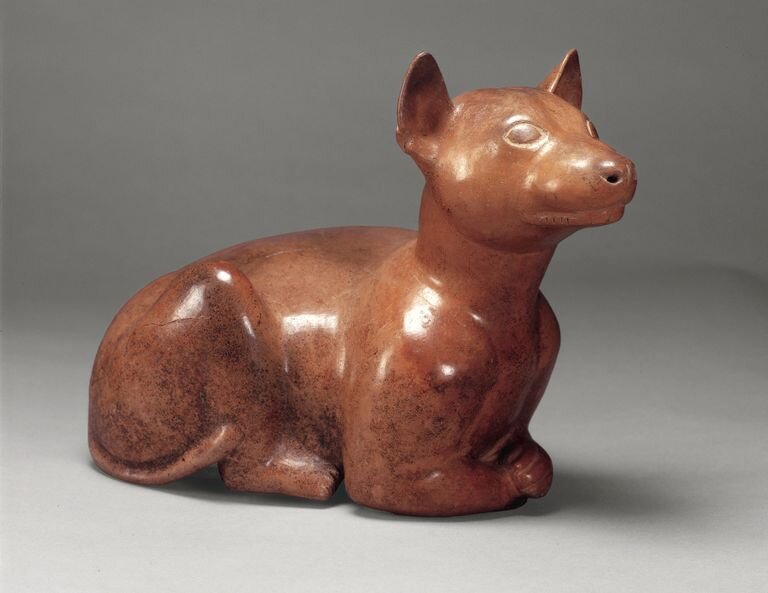 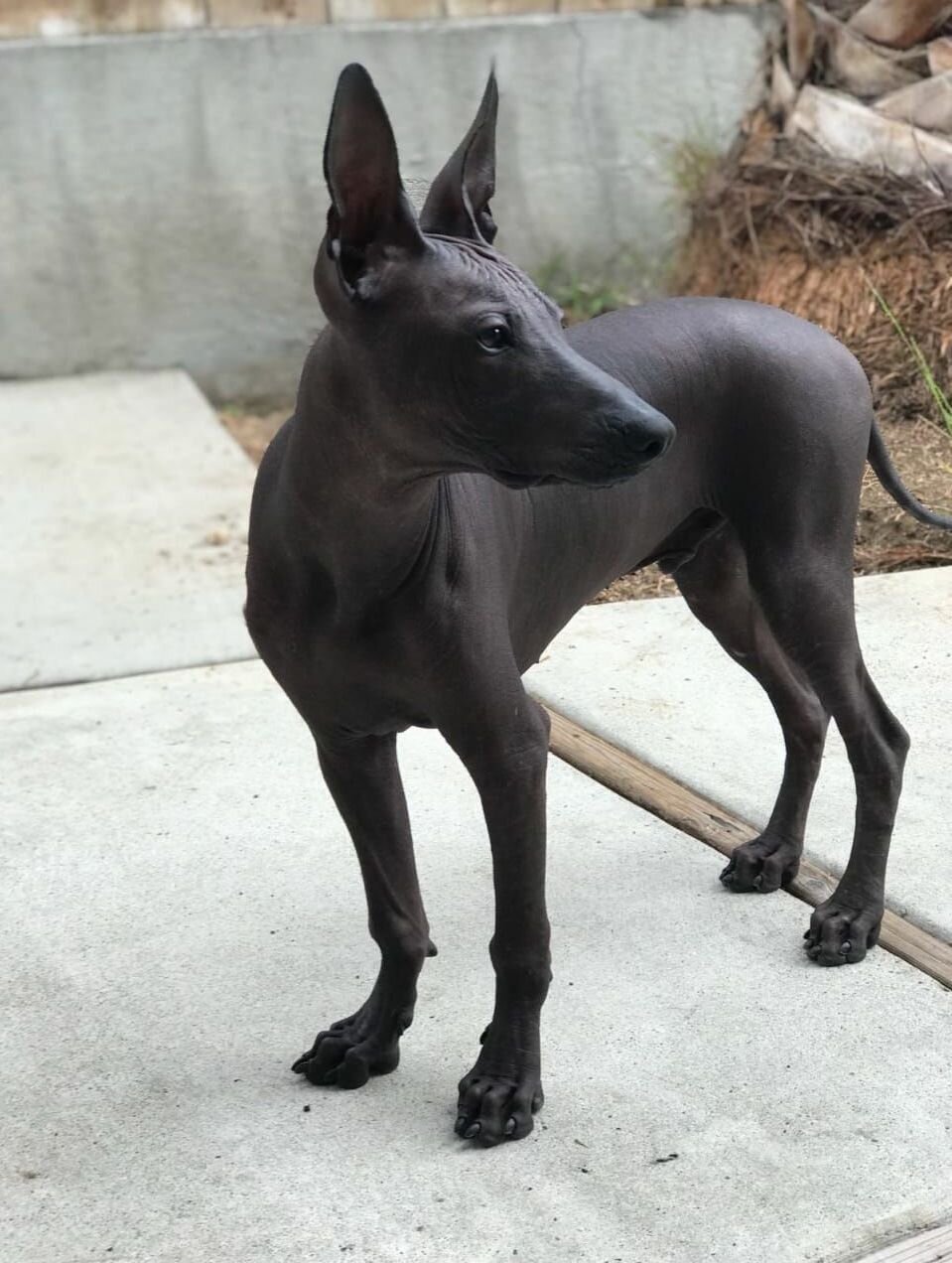 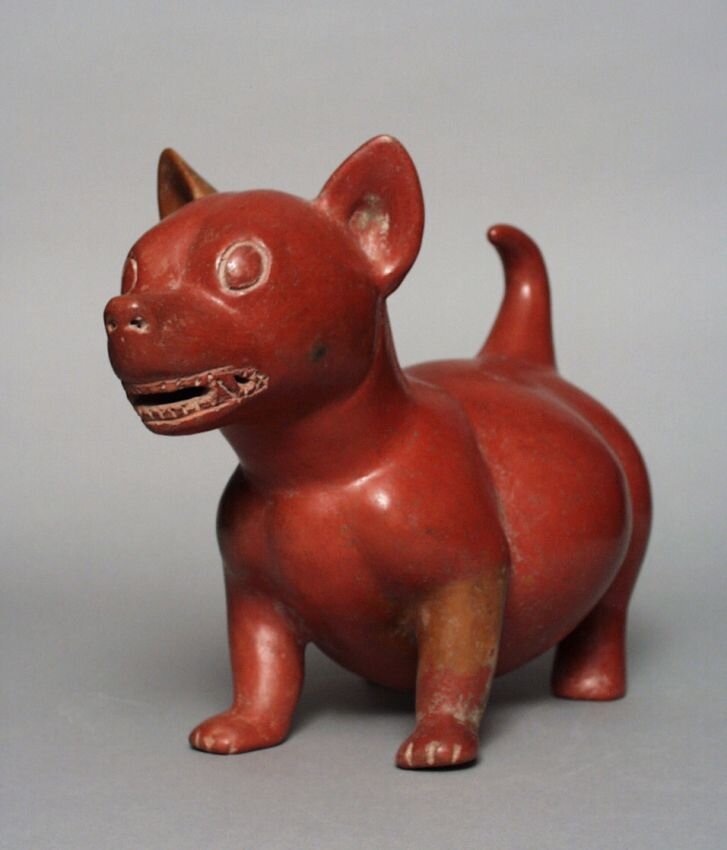 Click to find more information and Tips for Celebrating a Fun and Festive Día de los Muertos at Home in this great article by Porch.com!